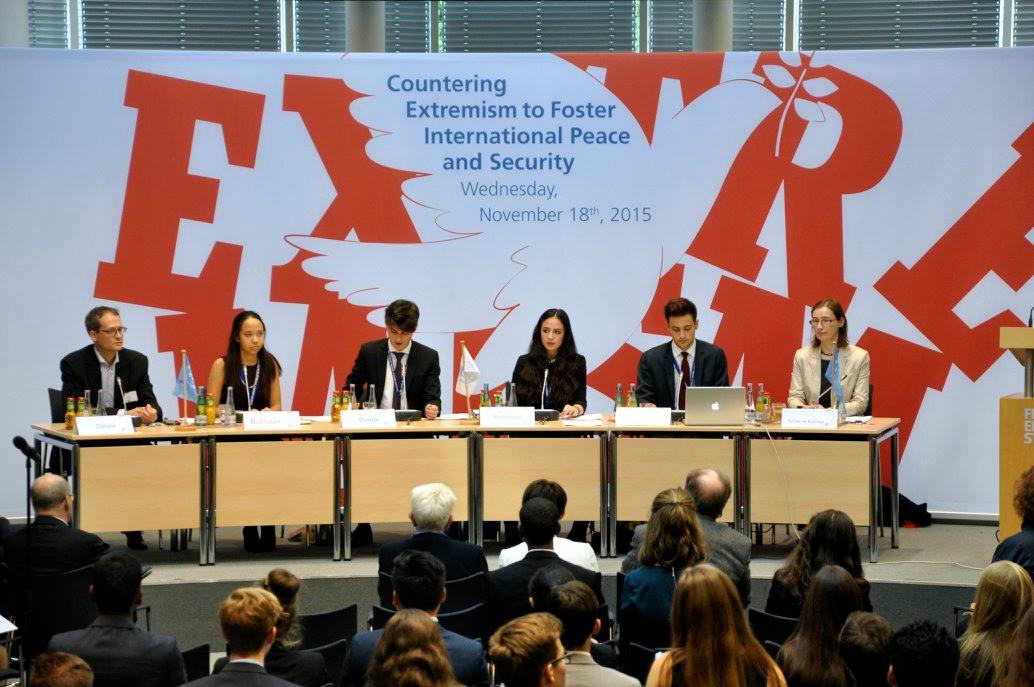 What is Model United Nations?

Especially engaged and committed members of the weekly activity are given the opportunity to join with their likeminded peers at larger MUN gatherings. Traditionally, JFKS MUN students participate in The Hague Model United Nations (THIMUN) and the Baltic Model United Nations (BALMUN) held in Rostock. In addition, the students and teachers engaged in MUN at the John F. Kennedy School (JFKS) organize and run two annual conferences, the Berlin Model United Nations (BERMUN) in November and BERMUN2 in February/March.

All High School students are welcome to join MUN debates held every Wednesday from 15:05 (9th period) to 16:45, beginning in the second week of school in W309. Useful information such as resolutions and articles which are helpful for the weekly debates can be found on our website at www.bermun.de. Contact a member of the secretariat or Mr. Lang for the password to access the ‘Weekly Debate’ section. We encourage participation from students in grades 7-12.

When the Berlin Wall fell in November 1989, two students at JFKS proposed the creation of a Berlin Model United Nations (BERMUN). Initially, they had two objectives in mind: to establish a dialogue with students from East and West Berlin and to facilitate understanding and promote consensus-building by debating international political, humanitarian, economic, social, and environmental issues in a forum simulating the United Nations system.

Their inspiration came from The Hague International Model United Nations (THIMUN), unquestionably the largest and most successful promoter of the MUN concept. Convinced of the value such a program offers young people, the JFKS administration and faculty lent their support to the student initiative. Since then, BERMUN at the JFKS has grown from fifty participants in 1991 to over six hundred. From a program primarily aimed at integrating students from East and West Berlin, it quickly expanded to include students from Eastern and Western Europe, the United States, Turkey, Saudi Arabia, Taiwan, Lebanon, Israel, China and Singapore, etc., thus making BERMUN a truly international gathering.

The primary objective is to foster greater international understanding among youth. BERMUN offers young people the opportunity to interact with their counterparts from around the world. Students represent countries vastly different from their own and express political beliefs and values often diametrically opposed to those of their own cultures and nationalities. Through this four-day simulation, they perceive the world and its problems in a wider context. They broaden their understanding of the complexity of issues that confront today’s world. BERMUN offers students a unique opportunity to gain experience in the democratic process. When BERMUN delegates interact, they openly address viewpoints, prejudices, and barriers that continue to separate young people.

Over the past years, BERMUN has developed into a highly recognized program, enjoying wide support in the Berlin community. The Friedrich-Ebert-Stiftung provides the opening venue for the introductory session of the larger November Conference and the Konrad-Adenauer-Stiftung opens its facilities for BERMUN2 February / March Conference. Keynote speakers at the opening ceremonies have included representatives from United Nations agencies and members of the diplomatic corps in Berlin, including ambassadors from India, Pakistan, South Africa, and the United States of America. From the modest vision of facilitating dialogue among fellow students in a unified Germany, BERMUN has evolved into an international forum for youth and offers an opportunity to encourage dialogue with contemporary policy-makers.

The Model United Nations activity, associated conferences in The Hague and Rostock, and particularly the BERMUN conferences provide students with different interests and competencies an opportunity to find their niche. For those absorbed in politics and international affairs debate in MUN and BERMUN committees is most attractive. Students with an affinity to international law are well advised to apply for the BERMUN International Court of Justice where thorough research and excellent deliberation skills are demanded. The Youth Assembly (YA) offers socially and politically motivated young people a forum in which they can share their concerns and develop action plans that address community issues. The Press Team, made up of students interested in journalism, photography and media, publishes pictures, online content and several editions of a newspaper, the BERMUN Times, during each conference. The Admin Team appeals to those JFKS students possessing strong social-organizational skills and interested in supporting the conference through setup, teardown and ‘behind-the-scenes’ activities.

We encourage participation from students in grades 7-12.

To learn more please visit the BERMUN website at www.bermun.de.

Questions about the admissions process:
To submit an application via email:

This website uses cookies to improve your experience while you navigate through the website. Out of these cookies, the cookies that are categorized as necessary are stored on your browser as they are as essential for the working of basic functionalities of the website. We also use third-party cookies that help us analyze and understand how you use this website. These cookies will be stored in your browser only with your consent. You also have the option to opt-out of these cookies. But opting out of some of these cookies may have an effect on your browsing experience.
Necessary Always Enabled
Necessary cookies are absolutely essential for the website to function properly. This category only includes cookies that ensures basic functionalities and security features of the website. These cookies do not store any personal information.
Non-necessary
Any cookies that may not be particularly necessary for the website to function and is used specifically to collect user personal data via analytics, ads, other embedded contents are termed as non-necessary cookies. It is mandatory to procure user consent prior to running these cookies on your website.
SAVE & ACCEPT