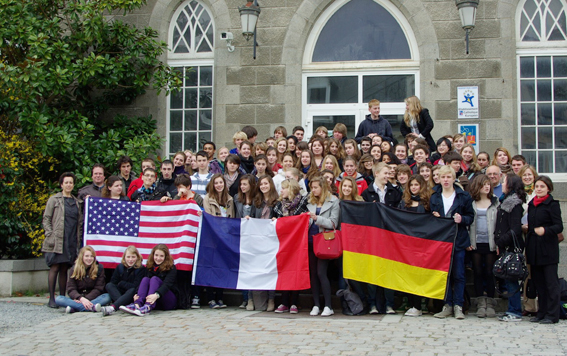 At the end of grade 10, students who started French in grade 7 are supposed to reach the B1 level of the Common European Framework of Reference for Languages (CEFR) and to match the following global standards. The students

After grade 10, students can continue learning French in a Grundkurs with 3 hours per week or a Leistungskurs with 5 hours. Both courses are part of the Abitur as well as of the Diploma program and also prepare for the AP exam. They are recognized as AP honors courses. Students can take a one-year-Grundkurs and stop French after grade 11, but they also can continue until the end of grade 12. The Leistungskurs is a core part of the Abitur program and includes grade 11 and grade 12, but is also an option for Diploma students striving for excellence in French.

At the end of grade 11, students should have reached approximately the B2 level of the CEFR matching the following global standards. The students

At the end of grade 12, students should exceed the B2 standards and reach the C1 level in certain fields.

In order to motivate the students and to foster their proficiency in the different areas of French language and culture, the French Department offers: